HomeJavaLearn about Java Datatypes and how we use them
Java

Learn about Java Datatypes and how we use them 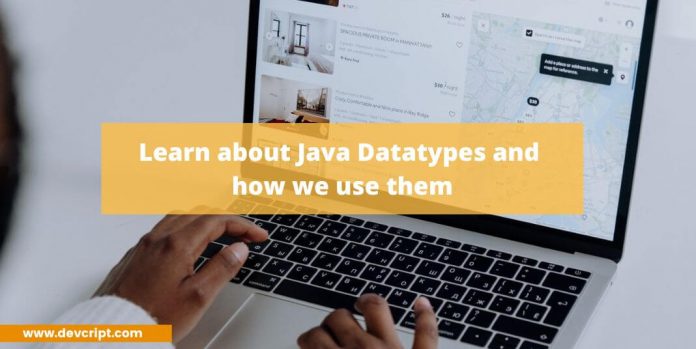 A data type (or Java datatypes) is a category of potential values and a set of permitted actions in computer science and computer programming. The compiler or interpreter can identify the data types on how the programmer intends to use them.

Most programming languages allow the fundamental data types of characters, Booleans, floating-point numbers, and integer numbers (of various sizes). The multiple values that an expression, such as a variable or a function, might take are limited by the data type.

The meaning of the data, the operations that can be carried out on it, and the techniques for storing values of that type are all determined by the data type.

Identifiers with associated values are called variables. The variable’s type and name are written in the declaration, and it is optional to initialize the variable by assigning a value in the same sentence. Using a comma as a delimiter, many variables of the same type can be declared and initialized in a single sentence. Before, using a variable you need to declare the variable as it is necessary.

Examples of variables are (“java type” and “ variable name”) we will learn about Java Data Types after this topic below:

Also read, Why Java is so popular among Developers!

What are data types?

A set of values and a set of operations that are defined on those values make up a data type. Java has huge reference type libraries that are designed for a wide range of applications to supplement the primitive data types you have been using.

They are used to support the variable as they store value or data as being named “Data Types” eg int, float, String, etc.

As non-primitive data types refer to objects they are also known as reference types.

The primitive types have been divided into two parts: integer types and floating point types.

It doesn’t contain decimal values and only stores whole numbers, whether they are positive or negative (such as 123 or -456). byte, short, int, and long are all acceptable types. The appropriate kind depends on the numerical value.

The floating point types represent fractional parts of a number that contain one or more decimals; float( eg:5.75f ), and double( eg:19.99d ).

Note: As there are a large number of numeric data types in Java, int for whole numbers and double for decimal numbers they are the most used numbers.

The range of whole numbers that the int data type may hold is -2147483648 to 2147483647. The int data type is the ideal data type when creating variables with a numeric value in general and in our course.

The range of whole numbers that the int data type may hold is -2147483648 to 2147483647. The int data type is the ideal data type when creating variables with a numeric value in general and in our course.

Fractional numbers are able to be stored in the float and double data types. Keep in mind that the value should end with an “f” for floats and a “d” for doubles:

Use “float” or “double” The number of digits a floating point value can have after the decimal point is determined by its precision. While double variables have a precision of roughly 15 digits, float variables only have six or seven decimal digits of precision. Therefore, for the majority of calculations, double is safer.

A scientific number with an “e” to denote the power of 10 can also be a floating point number:

Also read, How to make money through coding as a teenager?

When the boolean keyword is used to declare a data type, it can only accept the values true or false.

The main application of boolean values is conditional testing, which is covered in greater detail in a later chapter.

A single character is stored using the char data type. A or c must be used as single quotations around the character.

As an alternative, you can show some characters using ASCII values if you are familiar with them.

A series of characters are stored using the String data type (text). Double quotes must be used to enclose string values:

Java’s String type is so prevalent and well-integrated that some refer to it as “the special ninth type.”

Because it refers to an object, a String in Java is actually a non-primitive data type. There are methods available on the String object that are used to manipulate strings in various ways. If you’re still not sure what an “object” is, don’t worry. In a subsequent chapter, we will learn more about objects and strings.

When you assign a value from one primitive data type to another type, this is known as type casting.

There are two varieties of casting in Java:

By adding the type in parentheses in front of the value, narrowcasting must be done manually.

The variables are referred to as the nouns of computer language and data types hold on to the values in it. You will be mostly using int, String, and float/double (using double would be a better choice as it stores large decimal values).

The primitive data types are the most used by programmers. This is all about variables and data types. I have explained each of the data types so that you could get a brief idea so that you can memorize them and we will be using and learning these in the next classes.

Writing Your First Program in Java

Learn about Java Datatypes and how we use them