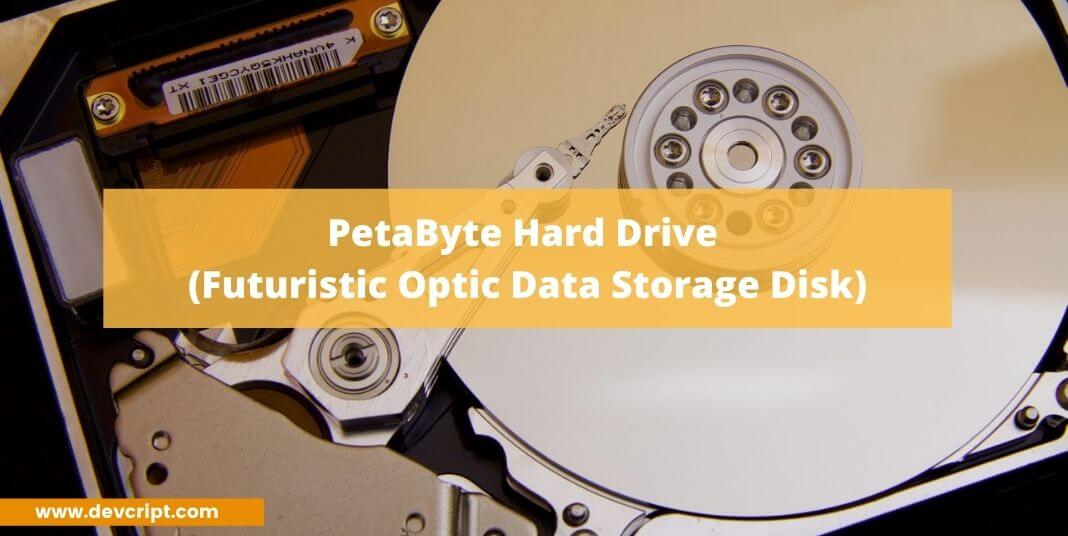 With the exponential surge in demand for storage due to the sheer production of videos of very high resolution and IOT( internet of things). The R&D laboratory of the various organizations is engaged in the development of a futuristic hard drive that will store enormous data and would have a dimension that would occupy very little space. With the advancement in technology and keen desire to invent experts are going to produce a PetaByte hard drive in which for storing purpose vital component would be used is glass.

1 Petabyte hard drive stores 1024 Terabytes or 1 million Gigabytes of digital information. It is denoted by the symbol “PB”. In the present scenario, magnetic materials are being used to store data but in the near future data would be stored in a piece of glass.

Software giant Microsoft company and second-biggest hyper-scale used fused silica of about 2.5 inches to store data about 75.6 TeraBytes. This is a remarkable achievement for the tech industry as presently the world’s largest disk has the capacity of about 20 Terabytes only and its size is much larger.

This machine was a major part of the IBM 305 RAMAC system and was acquainted with the public in September 1956. It had forty platters and a dual read/write head on a single arm that swings up and down the stack of the magnetic disk platters. It used to store 5MB of data.

It was a general-purpose data processing unit built to store business records on a real-time basis. The system required a great deal of labor force and occupied the better part of an entire room. This machine was one of its last kind to be built on the basis of vacuum tubes.

Truly IBM was one of the innovative companies of the latest century. It invented a magnetic disk that contained 100 concentric tracks on each side.500 alphanumeric characters, yielding a total storage capacity of 5 million characters, could be stored on each track. Any piece of info was retrieved in less than a second.

To provide the IBM 650 computer of the mid-1950s with 10,000 characters of main memory, this 16-inch-long drum spun at 12,500 revolutions per minute. Around the drum, data was magnetically encoded on 40 tracks.

This storage disk provided storage to 2 million characters, the equivalent of approximately twenty-five thousand punch cards. It also occupies less space in contrary to previous hard drives which used to come in a size of a refrigerator. It had the advantage of both tape and disk and had a low rental value which paved its way to meet a versatile storage demand and became a very influential product.

It had a larger capacity, flexibility, and speed which facilitated in expanding the operational capability of the IBM 7000 series of computer.1301 evolved in two Important areas: self-acting, air-bearing slider technology, and a separate read-write head for each disk surface with a comblike structure to hold the heads and move them in concert from one cylinder of data to the next. These development were the pedestal for decades of improvements in storage density and access times.

From 1979 through today the size of hard drives kept shrinking but the capacity to store data kept on increasing at an exponential rate, beginning with an 8-in. model, followed by 5.25-in., 3.5-in., 2.5-in., 1.8-in. and 1-in. disks. In the present scenario, great advances have been done and improvement is continuously being done to make it more portable.

It is a new generation storage device used in computers. In comparison to old traditional hard disk technologies, it is comparatively faster by using flash-based memory and speed up the computer significantly. due to their low read-access times and fast throughputs. SSD is high price equipment contrary to HDD due to the fact that it is more modern and advanced technology than HDD. It stores the file directly on-chip rather than writing it to a magnetic disk.

Glass Will Be  a Vital Component In Petabyte Hard Drive

To meet the ends of long term storage existing storage technologies have proved to be acute as it has a limited lifetime and regular data migration is bounded. In project silica, Microsoft has designed a long-term storage system specifically for the cloud using quartz glass.

How Does It Work

Using femtosecond pulse laser data is written. The order of the pulse duration would be 100 femtosecond equivalent to 1e-13 seconds. Contrary to surface optical media the laser is focused inside the glass and the glass is permanently modified creating a voxel. Each voxel has an orientation controlled by laser polarisation.

Voxels are written in multiple layers creating 3D arrays of voxels allowing for high storage density. Multidimensional data storage is achieved by controlling the X, Y, Z position orientation and strength of each voxel. Once a piece of glass is entirely written it is achieved and access only for the read. different technology is used to read and write data.

Data is read with a computer-controlled microscope. The piece of glass is placed in the read head using fast positioning, the track of interest is located. the read head focuses on the layer of interest and a set of polarization images are recorded. These images are processed to obtain the orientation(color) and strength(size) of each voxel. The read head then focuses on subsequent layer imaging layer by layer and reconstructing the original data.

Till now its price is unknown because the Petabyte hard drive is still in the development phase. John Morry, the CTO of Seagate has said their R&D laboratory is investigating the use of glass as optical data storage. let’s hope for the best that it comes in the market as soon as possible.

Saquib Ahmed
Hi, I am a business student, currently learning about Finance and Digital Marketing. I have also a keen interest in technology too. I enjoy reading and presently I am reading "The Psychology of Money". With these blogs, I am trying to make a journal for myself so that later when I look back I can see how due to my small initiative, helped to shape people's life and how much I grew.
RELATED ARTICLES
Technology